Texas oil and gas employment and drilling activity continued to grow in March and April. The price of West Texas Intermediate (WTI) crude strengthened to its highest monthly average since November 2014. However, pipeline capacity in the Permian Basin may be in short supply over the next year, putting downward pressure on barrels priced in the region and potentially restricting production growth in 2019.

Job growth in Texas’ oil industry continued to accelerate in March (Chart 1). Support activities for mining grew at a robust annual pace of 27.3 percent, with 8,800 jobs added from December 2017 to March 2018. The less-cyclical extraction sector picked up, growing at a rate of 11.4 percent (2,070 jobs) over that same period. 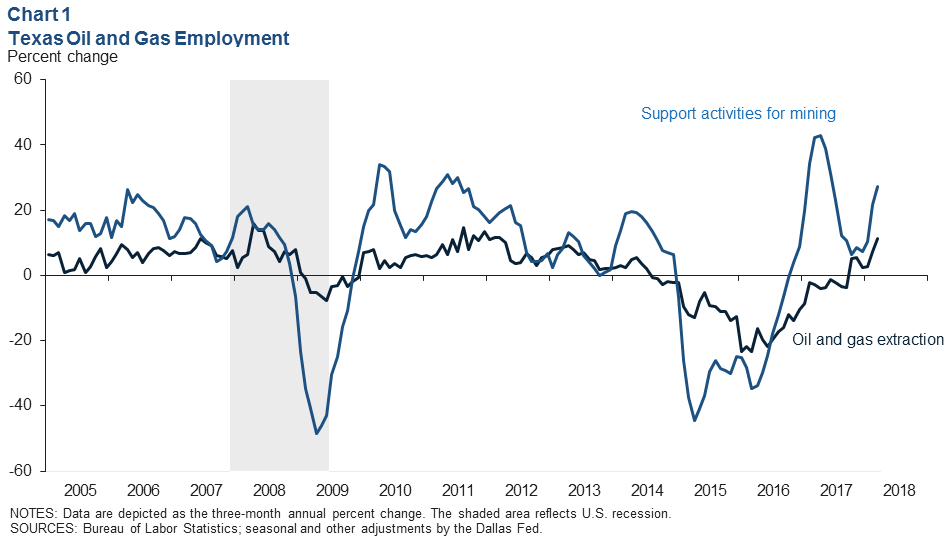 The average number of active drilling rigs in Texas increased by 13 from March to April 2018 (Chart 2). Nearly all of the gains came from the Permian Basin, which added 10 rigs over the period and is up 51 rigs year to date. The Eagle Ford rig count ratcheted up by four from March to April, its largest one-month gain since May 2017. 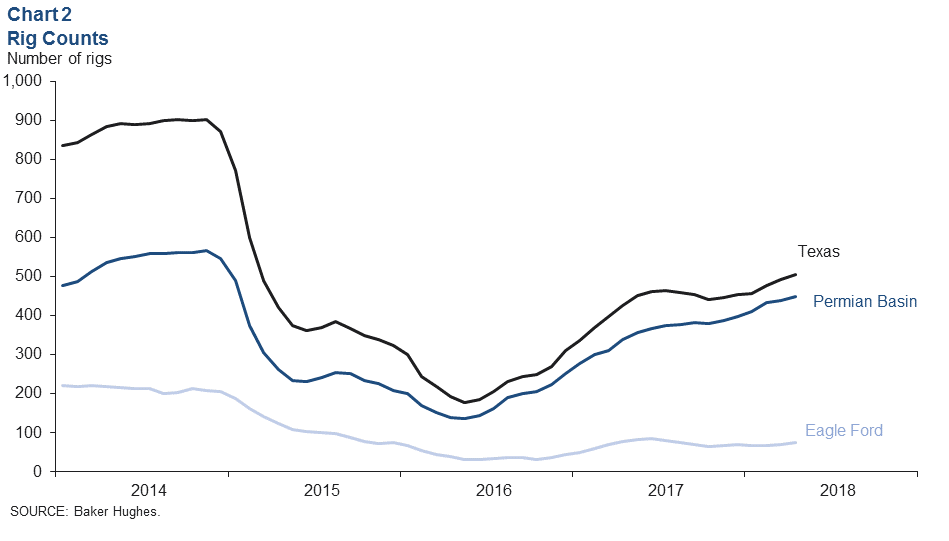 The spot price of West Texas Intermediate crude oil averaged around $66 in April, about $3.42 higher than in March (Chart 3). The increase was driven in part by a rise in geopolitical risk. The ongoing crisis in Yemen, increased turmoil in Libya, U.S. air strikes in Syria, the potential for a trade war between the U.S. and China, and uncertainty about the future of the Iran nuclear deal all contributed to a rising risk premium in April. Eroding inventories in the Organization for Economic Cooperation and Development (OECD), OPEC compliance with agreed production cuts, and diminished production from Venezuela continue to be supportive of crude prices.

The spot price of natural gas at Henry Hub in Louisiana ticked up from $2.67 in March to $2.80 in April, lifted in part by natural gas inventories continuing to drift down relative to their five-year average in the lower 48 states.

Declining petroleum stocks have been supportive of prices. The “inventory days of supply” measure—a ratio of current stocks of crude oil and petroleum products to current consumption—in the OECD was 0.7 days below its rolling five-year average in February at 58.7 days (Chart 4). Consumption growth and restrained global crude production have combined to slowly drain OECD storage tanks of the excesses that accumulated from 2014 to 2016.

More timely data for the U.S. puts days of supply at an estimated 59.3 in April 2018—the lowest level since February 2015 and the furthest below its five-year rolling average (2.8 days) since November 2004.

Even as falling inventories and geopolitical risks put upward pressure on benchmark crude spot prices, tightening constraints on crude oil transport are increasingly driving a wedge between the Brent global crude benchmark and crude priced in the Permian Basin. The discount between Brent crude and WTI barrels priced in Midland increased from an average of $2 in the first half of 2017 to an average of $5.30 in the second half (Chart 5). Congested takeaway capacity from the Permian has further widened the discount in 2018. That spread averaged $10.77 in April—the largest monthly spread between the two since September 2014. 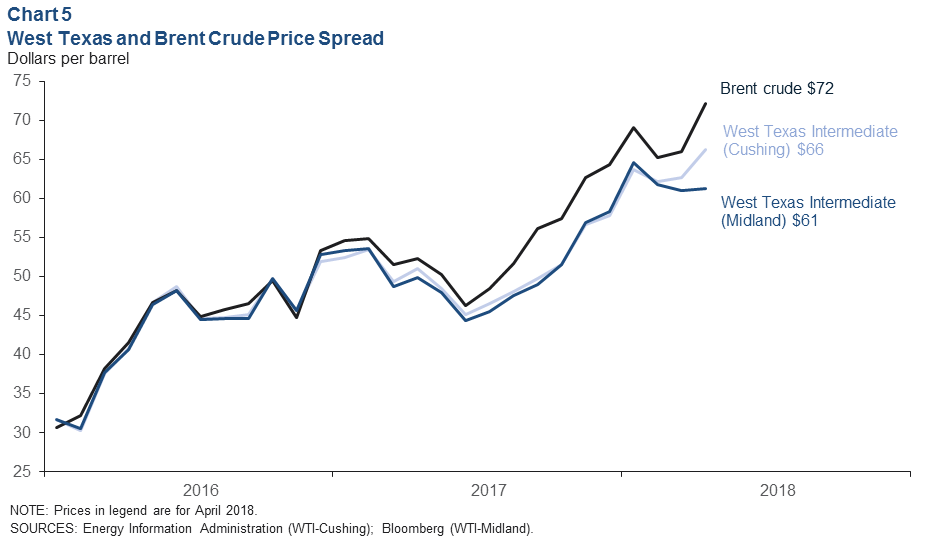 Permian oil production growth is straining existing pipeline capacity. While this is not currently restricting production growth, data suggest that Permian production could exceed transport capacity sometime between mid-2018 and mid-2019 if new pipelines are not brought online (Chart 6). Information from the Energy Information Administration, company reports, the Dallas Fed Beige Book and the Dallas Fed Energy Survey suggest that pipeline congestion could become a significant challenge to production in early 2019. This is particularly true for smaller producers because larger exploration and production firms are more likely to have long-term contracts in place for takeaway capacity.

Questions can be addressed to Jesse Thompson at jesse.thompson@dal.frb.org. Energy Indicators is released monthly and can be received by signing up for an email alert. For additional energy-related research, please visit the Dallas Fed’s energy home page.