In gathering qualitative data for this report, the Federal Reserve Bank of Dallas partnered with Educate Texas, an educational initiative of the Communities Foundation of Texas whose mission is to increase postsecondary readiness, access and success for all Texas students. Together, the partners conducted three focus groups with opportunity youth enrolled in a reengagement program.[11] Participants were asked about their goals and aspirations, how they got reconnected to work or school, and the particular challenges they faced in each of those settings. While the sample sizes are not large enough to draw statistical inferences, the anecdotal information from these respondents nevertheless opens a window into the lives of opportunity youth.

Many focus group participants noted that disconnection from school and work was often the result of having to make a difficult choice. For example, one participant said that he temporarily dropped out of school because his mother had had a stroke and someone needed to stay home to take care of her. While the participant’s father and siblings went to work and school, he assumed a caretaker role and, as a result, missed four months of school. Another student had plans to go to college but couldn’t afford to both attend school and make payments on her car, which she needed to get to school. The most common adverse experience focus group participants identified was dropping out of high school. Other barriers to reengagement that participants listed include substance abuse and involvement in the criminal justice system.

Many participants were referred to their program by a family member, a friend, or an adult they trusted, such as a social worker or a librarian. In a few instances, the court system played a role in connecting the young person to the program they’re in today. Some of these adults went a step further and helped participants to recognize the skills that they already had and to expose them to career possibilities they hadn’t previously considered. In general, participants said that they would not be where they are today without the investment, financial or emotional, of an adult. Still, it is a challenge for these young people to stay connected, with many of them juggling school, work and family obligations at the same time. As is the case with many young people, self-doubt and frustration set in when they experience a setback. Fortunately, their programs are designed to assist with such challenges.

Programs appear to be most successful when they are flexible. For example, the Ballew Academy in Pharr, Texas, permits students to come to school on a flexible schedule, allowing them to work outside of the classroom. Ballew also has on-site child care for students who are parents.

In each of the focus groups, participants acknowledged how valuable it was to have their counselor or coach text them reminders about school or work obligations. Some program staff members would provide transportation for program participants when needed. The long-term continuation of services was also important to focus group participants. Many appreciated that their programs would continue to check in on them, even after they accomplished relatively short-term goals like earning their GED (high school equivalency diploma) or finding their first job.

“They remind us [about] updates every single day and [ask] like, ‘How are you doing?’ This and that. It’s like, for me, they knew about my transportation problems—that I’ll be on a bus for six hours a day. So they would understand if I couldn’t make it on time.”

Program enrollees were especially responsive to staff members who were former opportunity youth themselves and could easily relate to the participants. In general, participants who were happy with their program described it as being a fun environment where you wanted to actively participate. One enrollee went back to the program’s office to do homework, even when it wasn’t required.

When asked what could be improved in their programs, participants typically had one answer: more money, especially money for scholarships. Another recommendation was to be more inclusive in who programs serve, specifically the formerly incarcerated and those over 24 years old.

When it comes to high school, many participants were dissatisfied with the curriculum offered and the heavy emphasis on attending college right after high school. At more than one focus group, participants commented that high schools could do better at providing students with certain life skills such as financial management and understanding taxes. One participant noted that while he liked science and history, he didn’t think learning these subjects would help students find a job. Another participant suggested that high schools could teach students entrepreneurial skills so they could find success in pursuing their passions, whatever they may be.

“I have to learn so much about taxes and banks and bills … different, real-life stuff. The stuff that you really got to worry about is not what they [are] teaching you in school.”

For a few focus group participants, the lack of career choices in their programs and schools was frustrating. These students were more interested in fine arts than the STEM (science, technology, engineering and math) fields that they felt shepherded into by counselors. One participant related his feelings through a metaphor: Say your favorite fruit is grapes, but you get asked if your favorite fruit is apples or oranges. No matter your response, your options have already been decided for you, and neither is particularly appealing. These participants felt as if society did not value their talents and felt skeptical that college would lead them to where they hoped to be in the future.

Even for those who were excited to be attending college, barriers still arose. Many students, especially first-generation college students, needed guidance with filling out financial aid forms, enrolling in classes and identifying requirements they needed for their majors. Some participants said that the counseling they received at school was inadequate and that one-on-one counseling sessions with their program’s staff were essential in overcoming these hurdles. For students at Ballew, dual enrollment was also helpful for students to establish a college-bound mindset and save on the cost of college tuition.

When asked about the barriers to finding jobs that they liked, participants stressed the importance (and difficulty) of networking and knowing someone who could get them a foot in the door. Relatedly, multiple participants noted that applying for jobs in-person was critical since online application systems are omnipresent and, in their experience, hardly ever result in an interview or job offer. Other barriers include lack of transportation, not having a bank account (for direct deposit), criminal history and not having legal immigration status. For some participants, getting along with other people was a barrier to steady employment in and of itself, noting the negative experiences they have had in customer service roles.

Focus groups in both Houston and Pharr named low wages as a problem. One participant said it was hard to find the “sweet spot” between liking one’s job and getting paid enough to get by. Another participant noted that the word “meaningful” has two definitions when it comes to jobs: Either a job fuels your passions, or it provides a stable income. Focus group participants seemed financially savvy, with one stating the exact amount of money needed to afford taking a full-time, unpaid internship. Participants in Hidalgo County commented that while their cost of living is low by statewide standards, the cost of housing and other goods is rising while wages remain stagnant.

On the whole, focus group participants were ambitious and optimistic. Their goals ranged from getting an associate or bachelor’s degree to owning their own business or simply being financially stable and independent. A common theme from each of the focus groups was that the participants who had reconnected wanted to pay it forward. They referenced a desire to use their future careers to help young people like themselves reconnect—by running a nonprofit, opening a community clinic or teaching barber classes, for example.

All focus groups were asked what advice they would give to their disconnected peers who may be looking to reconnect to work or school. Their responses are below. 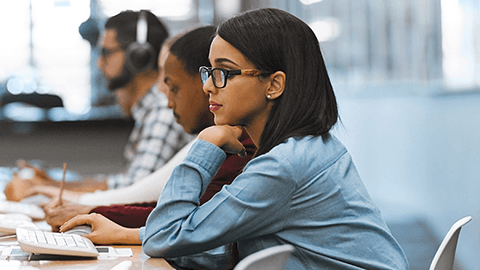