Incorporating October job growth of 2.5 percent and a slight increase in the October leading index, the Texas Employment Forecast suggests jobs will grow 2.1 percent this year (December/December), with an 80 percent confidence band of 1.8 to 2.4 percent. Based on the forecast, 267,200 jobs will be added in the state this year, and employment in December 2019 will be 12.9 million (Chart 1).

“After weakening since mid-year, Texas job growth accelerated in October,” said Keith R. Phillips, Dallas Fed assistant vice president and senior economist.  “While mining jobs declined at a steeper pace and manufacturing fell, service sector jobs accelerated, propelled by improvements in retail, health care, leisure and hospitality and local government.  The strength in October job growth is consistent with a recent improvement in the Texas Service Sector Outlook Survey and solidifies the continued expansion of the state’s economy despite the weakness in the energy sector and recent declines in the Texas Leading Index.”

The Dallas Fed’s Texas Leading Index declined over the three months ending in October (Chart 2).  Five of the eight indicators showed weakness with declines in help-wanted advertising and increases in the Texas value of the dollar having the largest negative contributions to the index.  Changes in the inflation-adjusted oil price, new claims for unemployment insurance and the U.S. Leading Index were mild drags in the index. Partially offsetting these negative contributions were a moderate increase in hours worked in manufacturing and slight gains in permits to drill new oil and gas wells and in the stock prices of Texas companies. 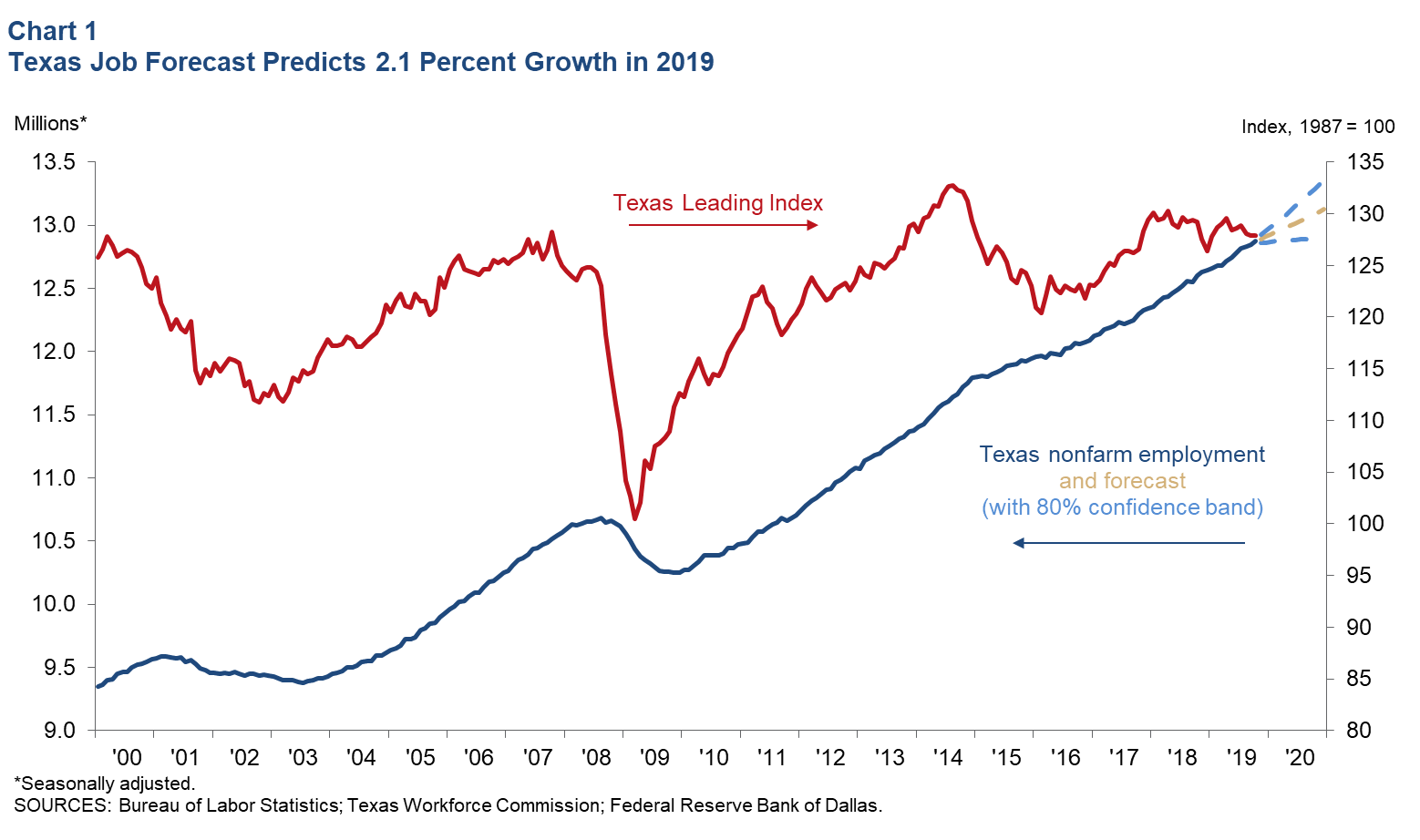 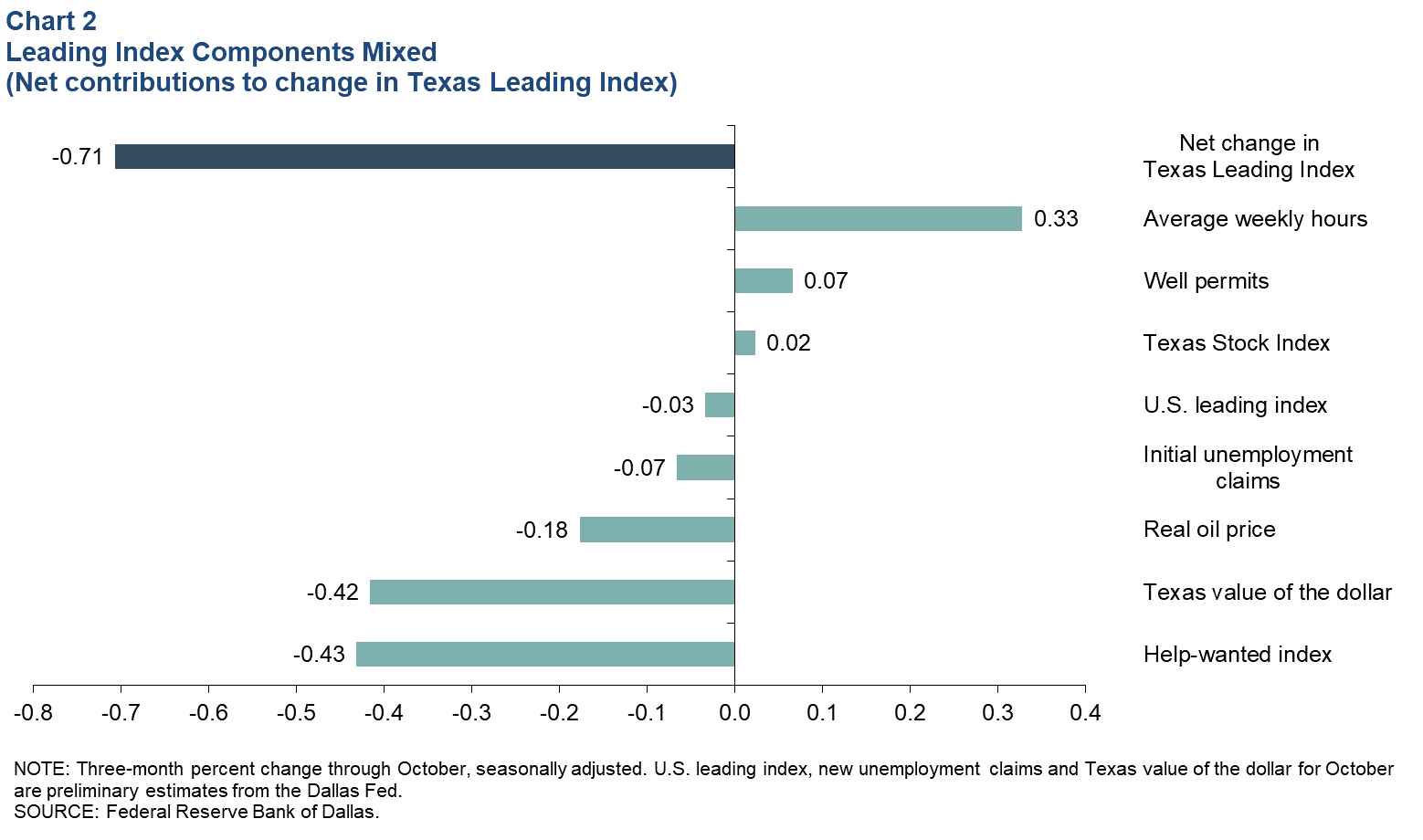 The Dallas Fed Texas Employment Forecast projects job growth for the calendar year and is estimated as the 12-month change in payroll employment from December to December. The forecast reported above is a point estimate with 80 percent confidence bands; in other words, the true forecast lies within the bands on Chart 1 with 80 percent probability.

The Dallas Fed Texas Employment Forecasting Model is based on a transfer function that utilizes past changes in state employment along with past changes in the Dallas Fed Texas Leading Index (TLI). Changes in the TLI have an impact on employment with a lead time of three months, and the effect dies out slowly over time. The regression coefficients on lagged changes in employment and the TLI are highly statistically significant, and the model as a whole has been accurate relative to other forecasters over the past two decades.

The forecasting model has been in use at the Dallas Fed since the early 1990s, and the employment forecast has been published in the Western Blue Chip Economic Forecast (WBCF) since 1994. Phillips and Lopez (2009) show that the model has been the most accurate in forecasting Texas job growth relative to other forecasters in the WBCF. In particular, the model had the lowest root mean squared error and has been the closest to the actual the most times (nine of the last 17 years) out of five forecasters that have consistently participated in the survey.

For more details about the model and its performance, see “An Evaluation of Real-Time Forecasting Performance Across 10 Western U.S. States,” by Keith R. Phillips and Joaquin Lopez, Journal of Economic and Social Measurement, vol. 34, no. 2–3, December 2009.

For more information about the Texas Employment Forecast, contact Keith Phillips at keith.r.phillips@dal.frb.org.