David Wessel, former journalist and current director of the Hutchins Center on Fiscal and Monetary Policy at the Brookings Institution, talks about the skills a former journalist brings to a think tank, the biggest economic problems facing the United States and the challenges of the modern press. 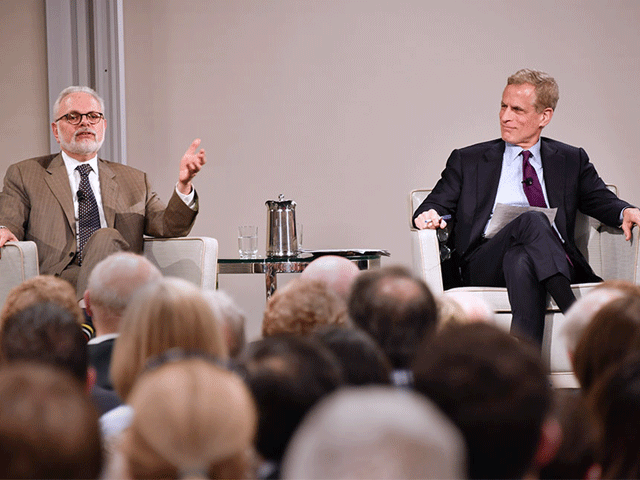 Wessel is a senior fellow in the Economic Studies Program and director of the Hutchins Center on Fiscal and Monetary Policy at the Brookings Institution.

He joined Brookings in 2013 after 30 years on the staff of the Wall Street Journal where, most recently, he was economics editor and wrote the weekly “Capital” column. He is a contributing correspondent to the Wall Street Journal, appears frequently on NPR’s Morning Edition and tweets often at @davidmwessel.

Wessel is the author of two New York Times best sellers: In FED We Trust: Ben Bernanke’s War on the Great Panic and Red Ink: Inside the High-Stakes Politics of the Federal Budget. He has shared two Pulitzer Prizes, one in 1984 for a Boston Globe series on the persistence of racism in Boston and the other in 2003 for Wall Street Journal stories on corporate scandals.

Wessel is a member of the Bureau of Labor Statistics’ Data Users Advisory Committee. He teaches in Dartmouth College’s Tuck School of Business Global Leadership 2030 executive education program and has been a visiting journalism professor at Princeton University.

Wessel is a graduate of Haverford College. He was a Knight-Bagehot Fellow in Economics and Business Journalism at Columbia University.