These borrowers also tend to have little savings and are, thus, extremely vulnerable to income shocks. How will these households—many first-time buyers—fare in response to the COVID-19 crisis?

The pandemic has resulted in massive disruption to households and businesses and, for many, affected their ability to service their debt. In response, many mortgage lenders have engaged in forbearance, attempting to provide a bridge for their borrowers’ finances through the pandemic. However, as the health crisis persists and the economic environment remains uncertain, some borrowers reaching the end of their forbearance will be unable to repay their obligations.

The situation appears most urgent for those borrowers who entered the crisis with a high debt load and little room to financially navigate without forbearance.

After the last mortgage crisis a decade ago, consumer protection regulations focused on a borrower’s ability to repay their mortgages, a situation we detailed previously. One measure of this ability is the borrower’s debt-to-income (DTI) ratio, or total monthly debt obligations as a share of monthly gross income.

The higher the DTI, the less ability a borrower has to absorb adverse income shocks and make all required debt payments. Consistent with this, the Consumer Financial Protection Bureau (CFPB) in 2014 issued an “ability to repay regulation” that increased lender liability for mortgages issued to borrowers with DTIs exceeding or equal to 43 percent.

The FHA, a government corporation within the U.S. Department of Housing and Urban Development (HUD), operates the largest federal mortgage insurance program. The FHA targets first-time buyers and low- and moderate-income households that tend to pose a higher risk. For FHA loans originated in 2018, the median down payment was 3.5 percent (resulting in a loan-to-value (LTV) ratio of 96.5), the median credit score was 662 (a below-average score), and the median DTI was 45 percent (a relatively high ratio).

Mortgage performance models typically focus on loan purpose (purchase versus refinance), LTV and credit score to determine the risk of loss. Borrower debt service burdens—a measure of liquidity risk—is notably absent. In fact, DTI is often missing or inconsistently measured in the databases commonly used to predict mortgage default risk. One potential explanation for this omission is that the industry believes that the LTV and a borrower’s credit score already sufficiently capture the default risk associated with a high DTI. A high LTV suggests that a borrower has relatively low savings, and a low credit score likely indicates relatively high debt service burden and some past difficulties managing that burden.

We explored whether a borrower’s DTI ratio at origination is a meaningful predictor of FHA mortgage default using HUD data for its insured loans. These data are well-suited to this task since they include well-populated and consistent information about borrowers’ debt service burdens, as measured by DTI.

To more closely look at this, we divide the population of FHA mortgages annually for 2004 through 2018 into four groups: low DTIs (less than or equal to 36 percent); moderate DTIs (between 36 and 43); high DTIs (greater than or equal to 43 but less than 50); and very high DTIs (at or above 50) (Chart 1). Over time, the two higher DTI groups have grown, and in 2018, they amounted to more than 56 percent of all FHA mortgage originations.

Chart 2 shows the relationship between DTI ratios and borrower defaults during the initial years of the mortgage without controlling for any other factors. We focus on three-year default rates because default early in the life of a mortgage is indicative of potential problems with a borrower’s ability to repay. We define default as a mortgage borrower becoming at least 90 days past due. 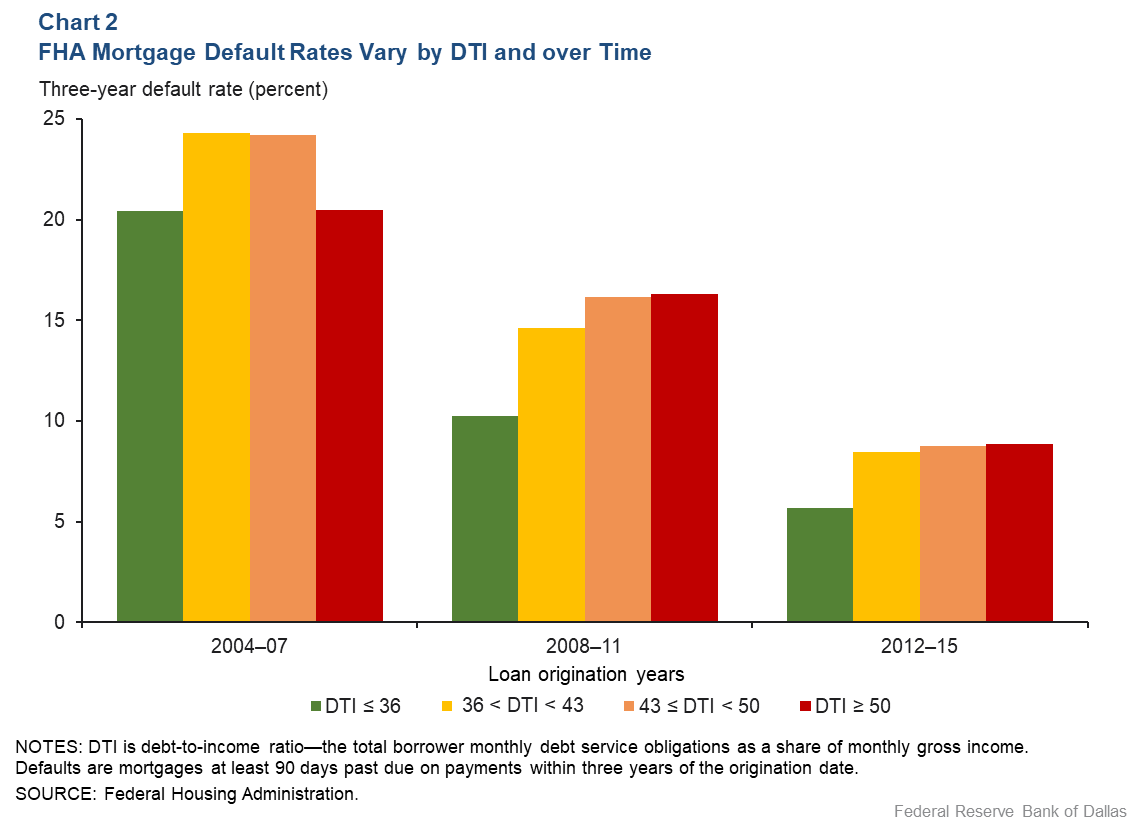 There is a positive relationship between DTI ratios and three-year default rates for the 2008–11 and 2012–15 periods, although for these years there is little discernable difference between the two “high” DTI categories. While the three-year default rates on FHA mortgages that originated during 2004–07 exceeded 20 percent, the relationship of default to DTI ratios is less clear.

Controlling for Other Factors

While the evidence in Chart 2 suggests that DTI ratios may only be a weak predictor of FHA mortgage credit risk, these are unconditional correlations. In other words, they do not account for the possibility that mortgages with high DTIs may have risk-mitigating characteristics, such as higher credit scores.

Chart 3 depicts the incremental three-year predicted default rates associated with DTI for FHA mortgages that control for some basic underwriting characteristics at origination—loan purpose, LTV and credit score. The chart presents the estimated increase in the default probability from being in the higher DTI categories relative to the low DTI category (DTI less than 36). 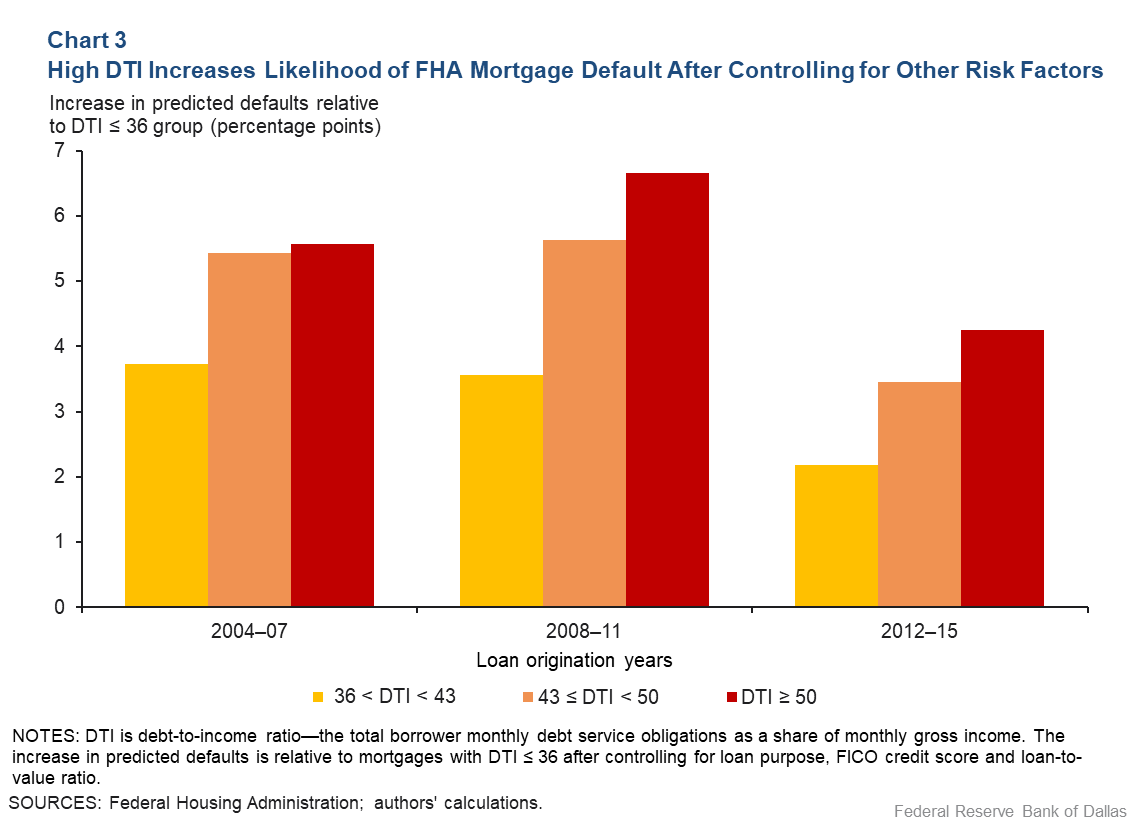 Once we control for loan purpose, credit score and LTV, we can see a more consistent positive relationship between DTI ratios and default risk. The moderate-DTI group (yellow) consistently has a higher expected default rate of 2 to 4 percentage points relative to the low-DTI group (not shown in Chart 3). The high-DTI groups (orange and red) are even higher at 4 to 6 percentage points. Splitting the high-risk group at DTI ≥ 50, we see some modest additional separation (less than 1 percentage point).

The effect of DTI on mortgage default is magnified during periods of economic stress, as the charts show. Loans originated between 2004 and 2011 had significant exposure to the housing bust and recession—featuring severe house price declines and high unemployment rates.

DTI is not as strongly related to default for mortgages originated between 2012 and 2015, but that does not mean high DTI mortgages are no longer risky. Rather, it is likely that the economic recovery suppressed their higher risk, which would reemerge if the economy were to go into a prolonged recession with some decline in home values.

Our analysis of FHA mortgages illustrates a very high default propensity that relates to the state of the economy; it also shows that households with a greater ability to pay, on average, perform better.

If the current macroeconomic outlook remains uncertain as federally mandated mortgage forbearance ends in 2021, there is a risk of a large increase in FHA mortgage defaults, especially among those borrowers with high DTIs. In this case, payment-reducing mortgage modifications may be necessary to reduce foreclosures, as was previously the case with the Home Affordable Modification Program introduced in 2009.

The tendency of FHA borrowers to devote a very large share of their incomes to paying debt will likely complicate any workouts to help keep them in their homes.

Dannels is a research analyst in the Research Department at the Federal Reserve Bank of Dallas.

Frame is a vice president in the banking and finance group in the Research Department at the Federal Reserve Bank of Dallas.

Gerardi is a financial economist in the Research Department at the Federal Reserve Bank of Atlanta.

Tracy is executive vice president and senior advisor in the Research Department at the Federal Reserve Bank of Dallas. 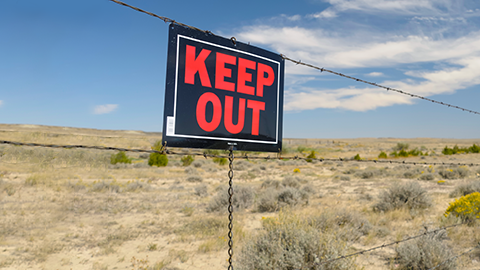 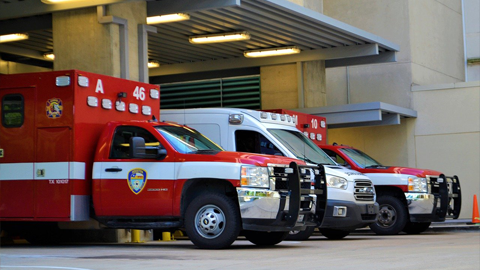 Texas Economy Soft in January, but Outlook Optimistic for Later in 2021 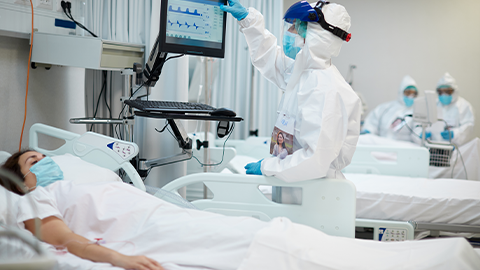 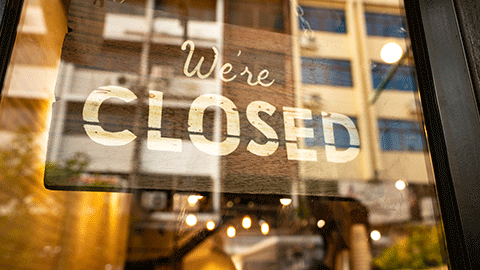