Texas factory activity continued to expand in June, according to business executives responding to the Texas Manufacturing Outlook Survey. The production index, a key measure of state manufacturing conditions, rose from 6.3 to 8.9, indicating output growth accelerated slightly from May.

Other measures of manufacturing activity exhibited mixed movements in June. The new orders index edged up to 3.7, a reading still below average. The growth rate of orders index fell eight points to -6.7, reaching its lowest reading in nearly three years. The capacity utilization index inched up to 9.6, while the shipments index retreated six points to 1.7, a two-year low. The capital expenditures index posted a double-digit decline, falling 11 points to 6.9, also a two-year low.

Perceptions of broader business conditions shifted down again in June. The general business activity index pushed further into negative territory as more firms noted worsened activity this month than last. The index declined from -5.3 to -12.1, hitting a three-year low. Similarly, the company outlook index fell from -1.7 to -5.5, also a three-year low. The index measuring uncertainty regarding companies’ outlooks pushed up to 21.6, its highest reading since the question was added to the survey in January 2018.

Labor market measures suggested solid, but somewhat slower, growth in employment and work hours in June. The employment index slipped from 11.6 to 8.8 but remained slightly above average. Nineteen percent of firms noted net hiring, while 10 percent noted net layoffs. The hours worked index remained above average as well but inched down to 4.7.

Upward pressure on input costs increased in June, while pressure on selling prices remained muted and wage pressure moderated. The raw materials prices index rose nine points to 16.4. The finished goods prices index was largely unchanged at 1.2, with the near-zero reading suggesting virtually no growth in selling prices this month. The wages and benefits index dropped five points to 22.7, closer to the long-run average for this measure.

Historical data are available from June 2004 to the most current release month.

*Indicator direction refers to this month's index. If index is positive (negative), indicator is increasing (decreasing) or improving (worsening). If zero, indicator is unchanged.

Data have been seasonally adjusted as necessary, with the exception of the outlook uncertainty index, which does not yet have a sufficiently long time series to test for seasonality. 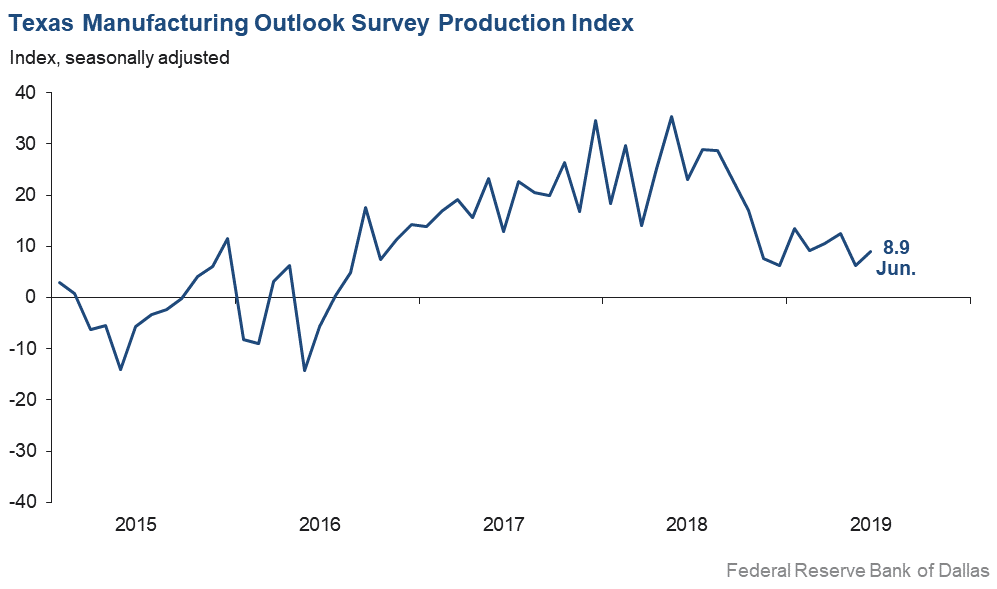 These comments are from respondents' completed surveys and have been edited for publication.

Historical data can be downloaded dating back to June 2004.

Download indexes for all indicators. For the definitions of all variables, see Data Definitions.

Download indexes and components of the indexes (percentage of respondents reporting increase, decrease, or no change). For the definitions of all variables, see Data Definitions.

Questions regarding the Texas Manufacturing Outlook Survey can be addressed to Emily Kerr at emily.kerr@dal.frb.org.

Sign up for our email alert to be automatically notified as soon as the latest Texas Manufacturing Outlook Survey is released on the web.