Special questions this quarter focus on labor market issues in the oil and gas sector and constraints impacting activity in the Permian Basin and other areas.

Energy sector activity expanded strongly in second quarter 2018, according to oil and gas executives responding to the Dallas Fed Energy Survey. The business activity index—the survey’s broadest measure of conditions facing Eleventh District energy firms—rose from 40.7 in the first quarter to 44.5 in the second—the highest level since the survey began in 2016. The increase was driven by both exploration and production (E&P) and oilfield services firms.

Utilization of oilfield services firms’ equipment increased at a slightly faster pace than in the first quarter, with the corresponding index at 42.1, up two points. Input costs continued rising but at a slower pace than last quarter as the index of input costs fell from 46.8 to 36.3. The index of prices received for oilfield services ticked down from 27.9 to 23.2, suggesting prices are increasing but at a slightly slower pace.

Labor market indexes point to more rapid growth in employment and notably longer work hours in the second quarter, particularly in oilfield services firms. The employment index was 44.1 for services firms and 11.6 for E&P firms—the highest levels for both indexes since the survey began. The hours worked indexes were at or near all-time highs: 50.8 for services firms and 18.2 for E&P firms. The aggregate wages and benefits index remained positive but dipped from 33.8 to 27.9.

On average, respondents expect West Texas Intermediate (WTI) oil prices to be $65.68 per barrel by year-end 2018, with responses ranging from $50 to $92 per barrel. Respondents expect Henry Hub natural gas prices to end 2018 at $2.91 per million British thermal units (MMBtu). For reference, WTI spot prices averaged $65.88 per barrel and Henry Hub spot prices averaged $2.96 per MMBtu during the survey collection period. 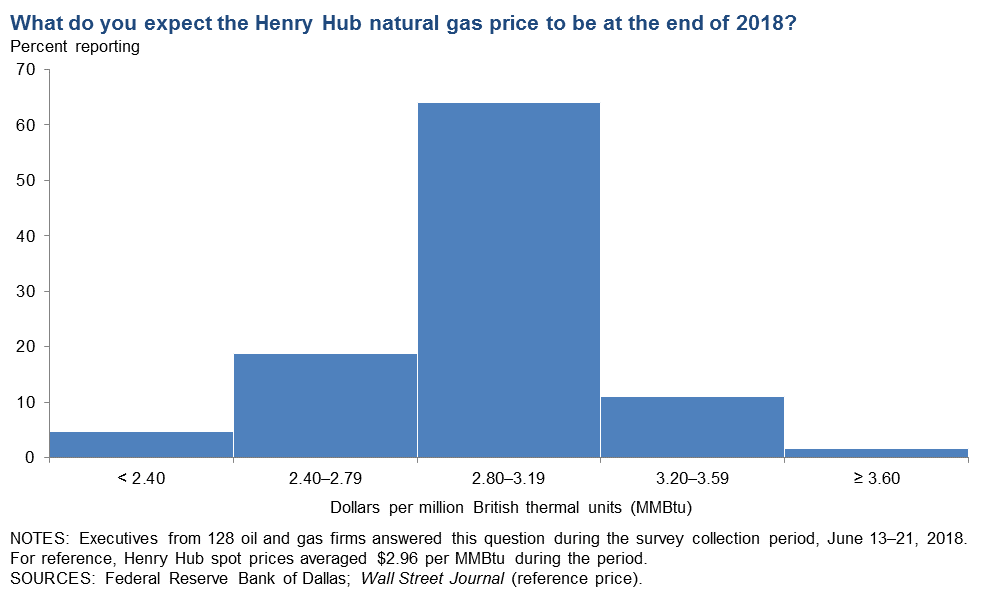 Data were collected June 13–21, and 135 oil and gas firms responded to the special questions survey.

Which of the following, if any, do you expect to limit near-term growth in activity in the Permian? Please check all that apply. 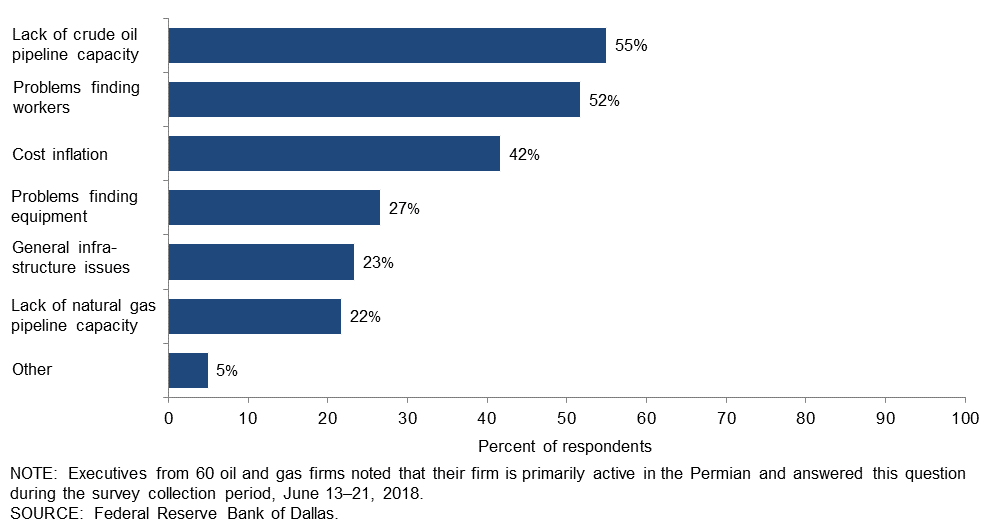 Which of the following, if any, do you expect to limit near-term growth in activity outside the Permian? Please check all that apply. 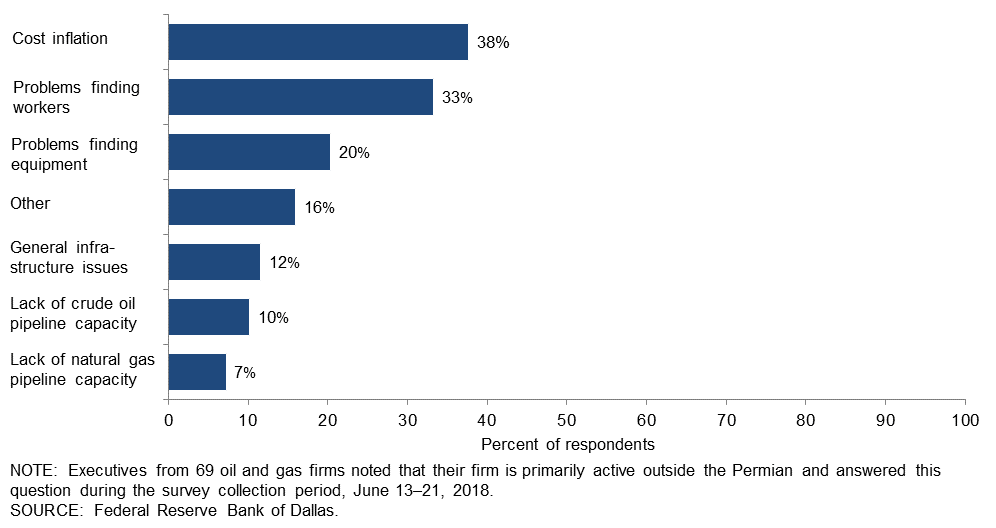 Is your firm having problems hiring?

If you are having problems finding workers, in which categories are you experiencing difficulty? Please check all that apply.* 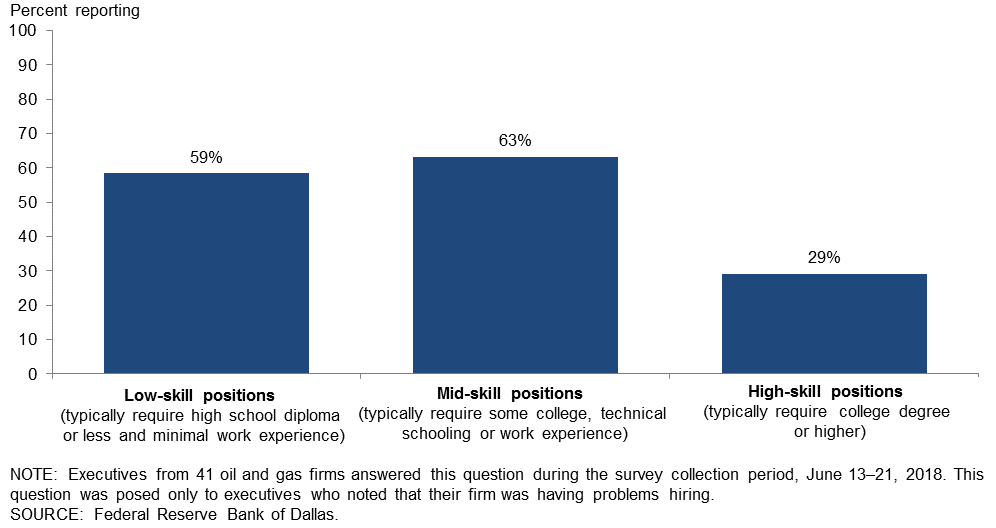 *This question was posed only to executives who noted that their firm was having problems hiring.

If you are having problems finding workers, what are the main reasons why? Please check all that apply.*

Of the 41 executives who responded that their firm was having problems hiring, 83 percent noted a lack of available applicants as a problem, followed by 49 percent who noted lack of experience.

*This question was posed only to executives who noted that their firm was having problems hiring.

What, if anything, are you doing to recruit and retain employees? Please check all that apply.

This question was posed to all executives, regardless of whether they noted their firm was having problems hiring. The method to recruit and retain employees most frequently selected by energy executives was increasing wages and/or benefits (45 percent of respondents), followed by increasing variable pay, including bonuses (30 percent of respondents). See the chart file below for a further breakout of results between firms reporting problems hiring and firms reporting no problems hiring.

Historical data are available from first quarter 2016 to the most current release quarter.

These comments are from respondents’ completed surveys and have been edited for publication. Comments from the Special Questions survey can be found below the special questions.

Questions regarding the Dallas Fed Energy Survey can be addressed to Michael Plante at Michael.Plante@dal.frb.org or Kunal Patel at Kunal.Patel@dal.frb.org.

Sign up for our email alert to be automatically notified as soon as the latest Dallas Fed Energy Survey is released on the web.